As I was preparing to speak at a prayer leadership meeting the other day, I felt impressed by the Holy Spirit to share some thoughts from John 16:33. This verse of Scripture has gotten my full attention at the beginning of 2009.

In the Amplified Bible it reads, ““I have told you these things, so that in Me you may have [perfect] peace and confidence. In the world you have tribulation and trials and distress and frustration; but be of good cheer [take courage; be confident, certain, undaunted]! For I have overcome the world. [I have deprived it of power to harm you and have conquered it for you.]”

John 16:33 first came to my attention this year through an email I received the night before I was scheduled to speak at my home church.  The email included the following quote from E. Stanley Jones…

“"In the world you will have trouble. But courage! The victory is mine; I have conquered the world" (John 16:33 NEB). I have conquered the world - not will conquer, but I have conquered. So every foe of the Kingdom is a defeated foe before we get to it. When sin and temptation come to bully me I ask them to bend their necks and when they do, I say, "Yes, I thought so. The footprint of the Son of God is on your necks." So I by identification with him become victorious in his victory, strong in his strength, pure in his purity, loving in his love. I work from the victory to the victory.”

There are several things that God has spoken to me through John 16:33 that I believe are pertinent to the year ahead. The first thing is we can be certain that we will face tribulation. This is nothing new. The church of Jesus Christ has been living through tribulation since its birth two-thousand years ago.
The second thing is that Jesus does not want us to place our focus on tribulation, but on Him. Jesus has overcome the world, but if we put our focus on tribulation, the world can easily overcome us with worry, fear and anxiety. 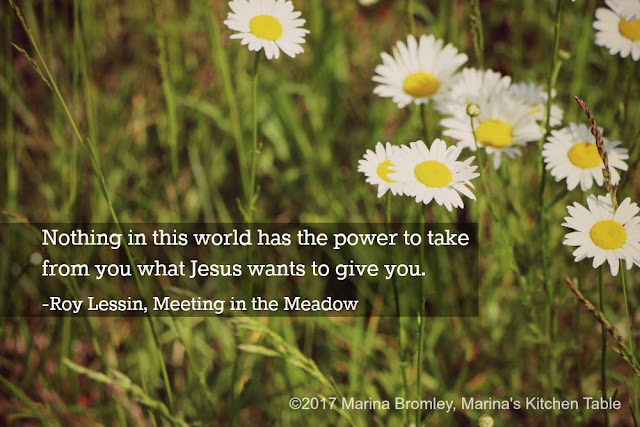 The third and fourth things are huge anchor points for us. Jesus tells us that even though we will have tribulation we can have His perfect peace; He also tells us that we are to be of good cheer. These two things, perfect peace and good cheer, should dominate our thinking, our speech, and our attitudes in the coming year.

Email ThisBlogThis!Share to TwitterShare to FacebookShare to Pinterest
Labels: meeting in the meadow, Roy Lessin