Meeting in the Meadow: "Gordon"

The following posting is from Laurie Marie Hopper. Laurie works in a Christian bookstore and her time spent with customers is an important part of her daily ministry.
-----

Some lessons in life I only have to learn once, but others it seems I have to learn over and over. Like the lesson of Gordon ... I'll never forget the day I met him. He was looking for a card for his "dear wife" as he called her. Now Gordon is an elderly man in his nineties....at one time he was a very tall gentleman. Gordon is stooped over a little and has a VERY wrinkly face.

I saw Gordon and said "Hi! How are you today?" I looked Gordon right in the eyes and smiled. Gordon looked back at me for a long time like he was pleasantly shocked someone would talk to him. We struck up a conversation and before long I learned that he had fought in world wars and had been a missionary and a pastor for many years. He also began to share with me all the jobs he had done ... I was amazed at this man! What a full life he had led! Before he left with his card he said, "The beauty of God shines in you!" Wow, what a sweet thing for a little old man to say! I told him goodbye and have a great day.

Well.....I didn't see Gordon for about six months. Then all of a sudden one day there he was! I was so glad to see him and he was glad to see me, too. But this time Gordon was a little bit different...he wasn't as clean as he was the first time I met him....and he didn't smell as well either. His eyes were a little bit dimmer and I noticed some food in his teeth. On first impulse, I didn't want to be so friendly.

"THIS was different!" I said to myself. "Do I have to still be friendly to this guy?" 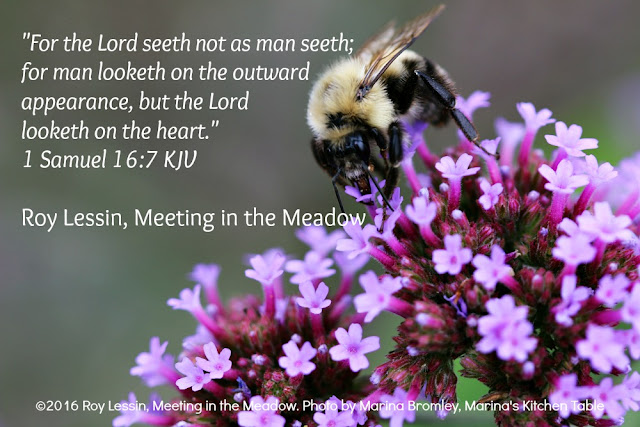 Now before you give up on me, you have to know where I didn't come from. I didn't come from a Christian home where you were taught basic courtesies and manners. I didn't have parents who taught me how to treat people nicely whether you liked the way they looked or smelled. God has had to teach me everything I've learned about kindness.

As Gordon proceeded to talk to me and engage in conversation, a scripture leaped up in my spirit...”For the Lord seeth not as man seeth; for man looketh on the outward appearance, but the Lord looketh on the heart.” 1 Samuel 16:7 KJV

I knew deep inside of me that I was suppose to treat Gordon like he was the best-dressed, best smelling older gentleman I ever met. And I did, with all my heart. I spent time with him and helped him pick out just the right card.

Just before he left he looked up at me and said, “Thanks for being so nice to me. Most people don't like to talk to old guys." I laughed and said, “You come in any time you like, Gordon! I love visiting with you!"

The next time Gordon came by the store, I was on the floor putting together a new display, and he said, “Do you have a few minutes? Probably not, huh?"

I replied, "Why, sure Gordon...what do you need?"  He said excitedly, “I’ll be right back!" Sure enough, Gordon came back with a big three-ring binder in his hands and gave it to me. I opened it up and to my amazement, it was full of the most beautiful pictures I had ever seen. Photographs of flowers, birds, landscapes, sunsets, insects; pictures of cocoons opening and baby butterflies struggling out. He also had pictures of flowers in sequence, as a bud, opening a little more, and even a little more, until finally fully open.

In utter amazement I said, “Gordon, did you take these pictures!?" "Sure did!" He replied with a grin stretching from one ear to the other. "I knew you would appreciate them so I came to show them to you."

"You do professional work, Gordon! You should sell these!" "Oh, but then I'd have to do bookwork!", he replied. After he was gone, I felt so satisfied inside and so grateful that I had not rejected him.

What did I learn? That we are never too old to dream and to be creative and productive; that the outward appearance can be so deceiving in judging what's inside a person; that I want to be like God .... I want to see like He sees ... He looks on the heart.

Do you have a "Gordon" in your life? Do you find yourself a little like me - apprehensive to reach out to those who might be different from you? Let me encourage you to reach out just a little more than you normally would ... experience the freedom and the personal growth that comes from getting out of your comfort zone and showing God's love to those who cross your path on a daily basis. I think you'll find pleasant surprises along your journey and you'll see more like God sees in the process.