September 12, 2016
I thought to write about generosity; it's been a common topic around here and it's always a favorite topic of mine, as it goes hand in hand with the thought of missions and sending and supporting here, near, and far away.

HA! I guess I DID just write about it... but it's not my main point.

My heart (again) is pulled towards being a good neighbor. It's a common topic in these Proverbs, and so I think it must have ALWAYS been important in society.

I'm always curious how new neighbors respond to us moving into the neighborhood.

Sometimes they don't say a thing! In one neighborhood, it took nearly 8 months before they introduced themselves! They had little to say about the neighborhood or life in that city, and we pretty much only spoke with them a few times in the year we lived there, even though our driveways were next to each other and their kids played on the basketball goal often at the same time my grandkids did ours. It was awkward!

Another time one of the neighbors came out and told me who was who on our whole street... who was married/divorced/single, who had kids, what everyone did for a living. It was ok to get a mini rundown, but she got pretty personal, and it turned out to be pretty much a lot of gossip. It made it hard to meet these people for myself, and get to meet them on my own, having her pre-determined descriptions sitting in the back of my head.

Thankfully, it was one of the most friendly neighborhoods ever, and it was easy to get over her notions.

Perhaps because I've been the new neighbor so much, I know the type of neighbor I hope others want to live next to. I don't want to be gossipy but want to give an honest complimentary description about the neighborhood. I want each of my neighbors to shine!

I love where we live now, and as we get to know our new neighbors, I hope I can do all of my neighbors justice. We don't have to all be best friends, but I pray we can be neighborly - in the best ways!! 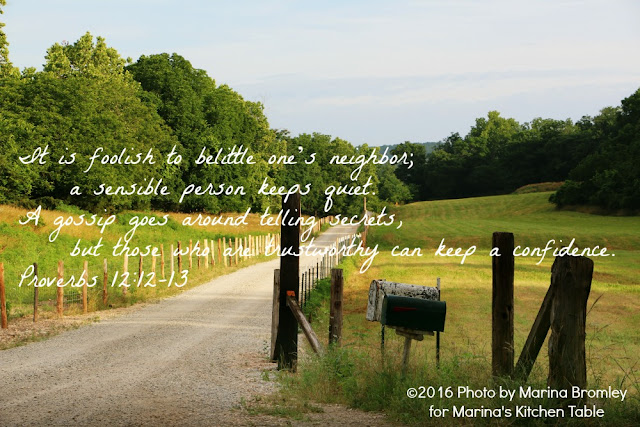 1 The Lord detests the use of dishonest scales,
but he delights in accurate weights.
2 Pride leads to disgrace,
but with humility comes wisdom.
3 Honesty guides good people;
dishonesty destroys treacherous people.
4 Riches won’t help on the day of judgment,
but right living can save you from death.
5 The godly are directed by honesty;
the wicked fall beneath their load of sin.
6 The godliness of good people rescues them;
the ambition of treacherous people traps them.
7 When the wicked die, their hopes die with them,
for they rely on their own feeble strength.
8 The godly are rescued from trouble,
and it falls on the wicked instead.
9 With their words, the godless destroy their friends,
but knowledge will rescue the righteous.
10 The whole city celebrates when the godly succeed;
they shout for joy when the wicked die.
11 Upright citizens are good for a city and make it prosper,
but the talk of the wicked tears it apart.
12 It is foolish to belittle one’s neighbor;
a sensible person keeps quiet.
13 A gossip goes around telling secrets,
but those who are trustworthy can keep a confidence.
14 Without wise leadership, a nation falls;
there is safety in having many advisers.
15 There’s danger in putting up security for a stranger’s debt;
it’s safer not to guarantee another person’s debt.
16 A gracious woman gains respect,
but ruthless men gain only wealth.
17 Your kindness will reward you,
but your cruelty will destroy you.
18 Evil people get rich for the moment,
but the reward of the godly will last.
19 Godly people find life;
evil people find death.
20 The Lord detests people with crooked hearts,
but he delights in those with integrity.
21 Evil people will surely be punished,
but the children of the godly will go free.
22 A beautiful woman who lacks discretion
is like a gold ring in a pig’s snout.
23 The godly can look forward to a reward,
while the wicked can expect only judgment.
24 Give freely and become more wealthy;
be stingy and lose everything.
25 The generous will prosper;
those who refresh others will themselves be refreshed.
26 People curse those who hoard their grain,
but they bless the one who sells in time of need.
27 If you search for good, you will find favor;
but if you search for evil, it will find you!
28 Trust in your money and down you go!
But the godly flourish like leaves in spring.
29 Those who bring trouble on their families inherit the wind.
The fool will be a servant to the wise.
30 The seeds of good deeds become a tree of life;
a wise person wins friends.
31 If the righteous are rewarded here on earth,
what will happen to wicked sinners?
...............