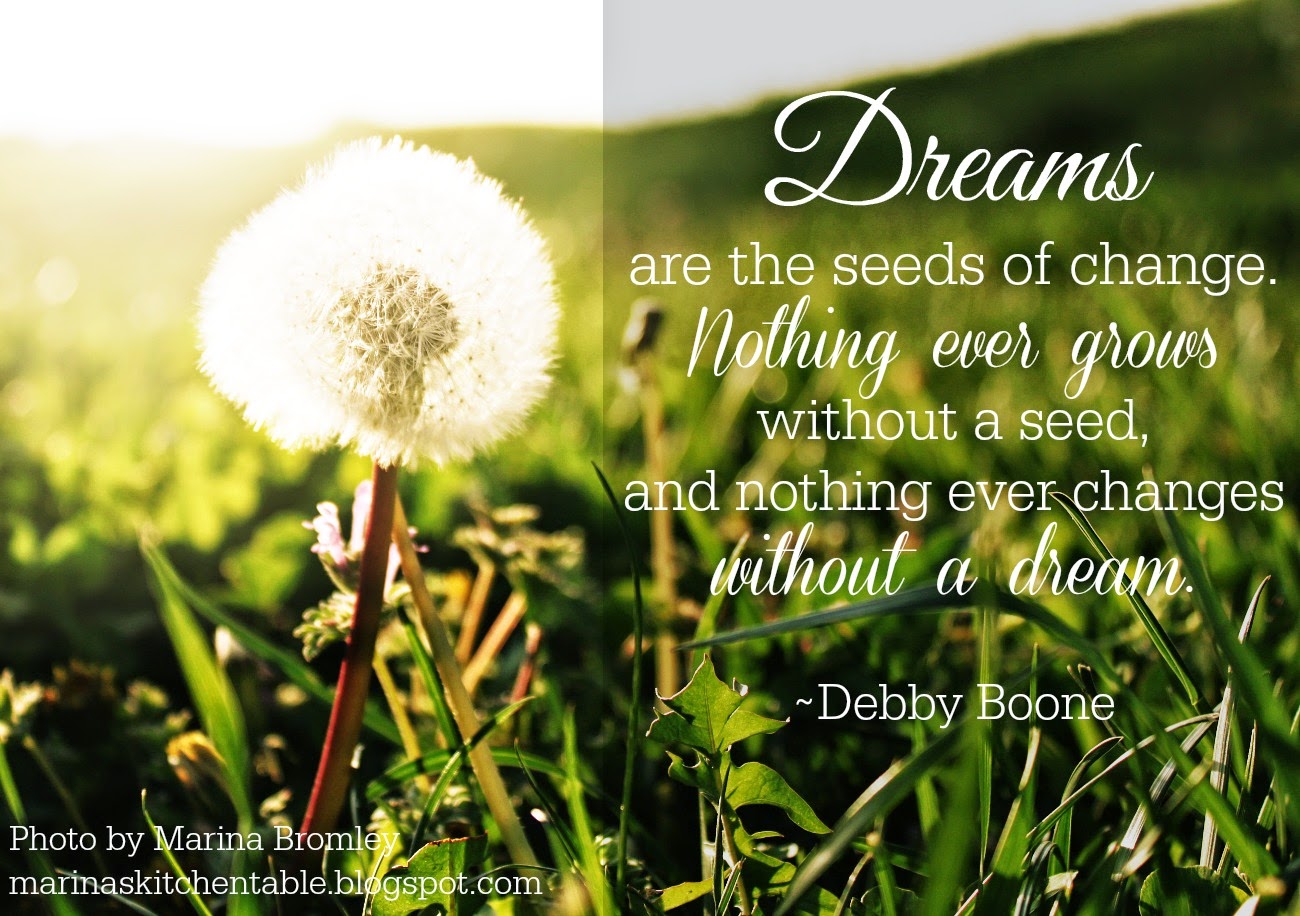 When I was a girl growing up in Southern California, there was only one sure way to make a little money. My dad would pay me to pick the dandelions out of the lawn! I'd get a penny to pick each yellow flower that was growing, and a whole nickle for each seed head - only if it stayed in tact. If the seeds fell on the grass, well, that wasn't worth getting paid for at all.

Little did I know that my dreams, like those dandelions, would get plucked and tossed aside by the same man that paid me to save his lawn. I'm sure that he just had a different idea what his namesake should do when she grew up, and that he felt that being an artist, a photographer, or a writer, wouldn't bring the notoriety that he sought his whole life. He'd rather I became an attorney fighting for the working man, and of course work my way up to becoming a major player politician.... President even!

I came from "poor Dutch immigrant" stock on my dad's side, his first child, and born in the U.S. - not his native Holland. My mom, his first wife, died when I was nearly 14 at the start of my sophomore year in high school. I'd started school very young, not a problem when you're a reading 3 year old, but a major problem when you're a senior at 15. I don't remember if my mom had dreams and ideas for me to grow up into. I don't remember talking like that with her at all. But my father's expectations met bitter disappointment when I dropped out of college to work, first for a small law firm, and then it finally met his approval when I got a "good Union job" with a major telephone company. At least I was "still a part of the labor movement."

When I became a Christian - a FOLLOWER of Jesus Christ - any approval from my father began to unravel as I allowed Jesus to become the Lord of my life - and no longer tried to impress my earthly father. I wasn't following the god of self, the god of the labor movement, the god of my father's approval. A wedge was driven deep, as I stopped trying to capture his attention and started praying about what God wanted in my life; what His dreams were for me, and where He would move me. I clung to Luke 12:51-53, trusting that the life I was living was what Jesus meant when He told the crowds...

Do you think I have come to bring peace to the earth? No, I have come to divide people against each other! From now on families will be split apart, three in favor of me, and two against—or two in favor and three against.

‘Father will be divided against son


But as God changed my heart to accept and trust His love more, He also moved me in new ways; freedom from addictions, changing my bad habits, giving me a passion for deaf children in Mexico, teaching how to lean HARD on Him through an illness (that closed the door for me to go live with those kids), eventual healing, and then meeting my husband! By then, all I wanted to be was a wife and a mother... my artsy-craftsy side would be content to make crayon drawings and creative second-hand home decor. I was fulfilled to share life with my husband, and the dramatic poems of love lost were thrown away, since love was now found! I limited my journaling to notes written for our young children, and occasionally I would have the opportunity to use my passion for writing to craft a devotion, or help someone with their resume, or to write a letter to an editor... that tiny bit of political blood still ran in my veins, although in my dad's eyes, now I was on the enemy's team.

Over the years we raised our kids, worked on our marriage, tried hard to find community in church, and my relationship with my father continued to deteriorate. Despite that, in many ways, I was still seeking his approval, the little girl in me still wanted to know my daddy was proud of me; to hear him say "Good job!" even if it wasn't for his dream being fulfilled for my life, but my own dream, inspired by God.

It was funny when I started to write for the local magazine in our region. Like most things, God didn't put an ad in front of me and make me apply for the position,  it wasn't me seeking out the job at all - someone just emailed me and said "I'd like you to do this... would you pray about it?"  After prayer on both sides "Auntie Em" was born to write the "Inspiration" article for Connection Magazine of SW Missouri. (We lived in a VERY small town, and our religious views were a little bizarre for most of the residents, so I opted to write without disclosing my identity... which was eventually found out anyways - but after they became a fan!). I wrote for the first 2 years of the magazine's life, and it was a joy and blessing to get to do it.

The sad part came because my father, who lived in the same area, but refused to spend time with me, read the articles, but would never tell me. He told others how proud he was of me, even carrying stacks of the magazines around for years after I'd stopped writing for the magazine.. but if I saw him he was still antagonistic towards Christians in general, and my faith most of all.

When I saw him for the last time, he was able to tell me he loved me, was able to apologize for "the things he did to tear our family apart," (which was HUGE to hear), but he couldn't tell me he was proud of me, and that's ok. I wasn't writing for him... I was writing for HIM... God... to fulfill the desire He put in me. It was HIS dream that was planted in me... not my own dream, devised for myself or to bring me glory; it's always to bring glory to Him. Even in my little world of blog-dom, I still ONLY, ALWAYS, want to write to bring glory to Jesus, my Savior.

Oddly enough, my dad had a saying he frequently would say (especially when there were complaints from the neighbors about his lack of landscaping and yard clean-up), "One man's weed is another man's wildflower." The weeds that took over his property he claimed were beautiful to him, and he refused to mow them down. Yet what he saw as weeds in my life, were MY wildflowers.

In our area, the LONG winter, and now beautiful spring, have the dandelions going CRAZY! Everywhere I look I'm seeing seas of yellow, or swaying seed heads full of potential, ready to be blown in the breeze. To many people, the dandelions are an obnoxious weed. Certainly to anyone wanting a completely green lawn! However, to some people, it's much lovelier than that; they are beautiful, colorful, alive and full of possibility. Perhaps they provide nourishment on someone's salad. It's certainly more lovely than dead desert wasteland.

I've heard that a dandelion will hold it's seeds until the weather is PERFECT for planting; the humidity "just right" for it to land in moist soil, and sometimes an updraft will lift the seeds miles in the air only to be deposited in another (dandelion free) yard.

I think He does the same thing with us. He creates seeds of hope within us, planting His dreams, full of possibility - new ways to bring glory to His name. Seasons will come and go, and those dreams will lie dormant, and the plants may look completely dead, but at just the right time, He brings them alive with His breath, lifts those dreams up, and scatters them wherever He wants them to be, sown deep into the soil of our hearts. He waters, weeds, and makes us bear fruit. Those dreams fulfill His will for our lives, show us how much He pays attention to details, make us depend on Him in new ways. We're always being changed, always growing in new ways, always dreaming new dreams. He makes us beautiful, whether we're weeds or wildflowers; whether we're accomplished writers, artists, photographers or mothers and grandmothers... most likely we are both...

Lord, I praise You - You have created each of us to be a unique people, and You gifted us in different ways. I'm so blessed to be your daughter... and I pray that You will delight in the accomplishments that bring glory to Your Name. I pray that we will seek to ONLY please You, in every area of our life. You have made us "pre-approved" and I want to walk in that approval, not seeking after any "man's" approval. May You be glorified in my life, by whatever talents I am capable of using. Let me draw near to You; see Your goodness in creation; rest in Your arms. Continue to amaze me with Your gifting and teach me how to bring glory to Your Name.  For I pray in Jesus' Name...