Fun and Games Anyone?? 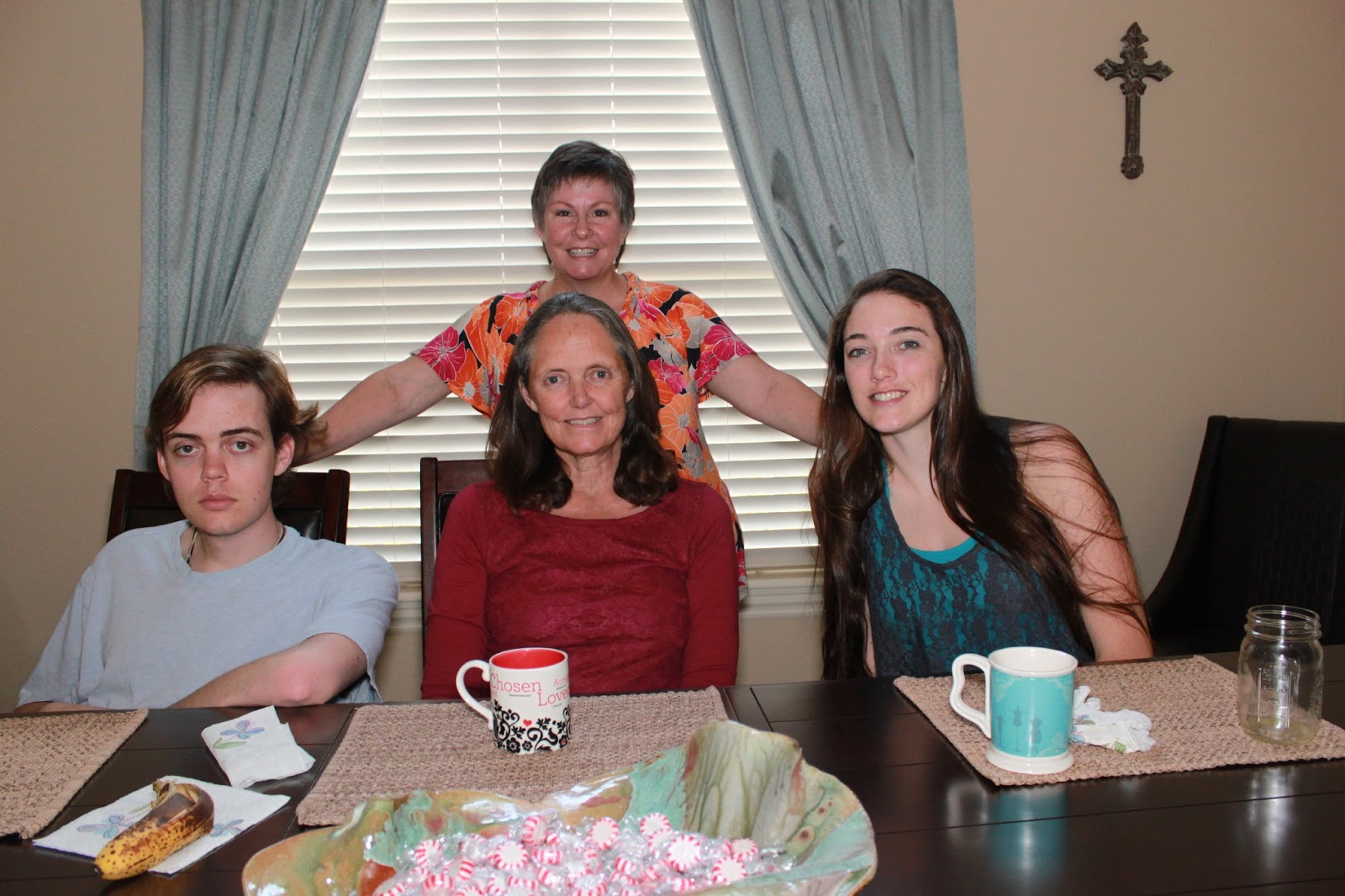 Our LONG-TIME friends, M and K vdL came to visit us last weekend. They were staying in Branson, a central connecting place for them with their kids, just a few hours from us. They came by our house as they were headed out of town, and we shared brunch together with them. It was so good to see them, for us all to get together! I had seen them a few days before, as I drove out to Branson, and we played games and shared a simple meal before I headed back home. We had seen them last 2 years ago, when we went to CA for a week's vacation, catching up with family and friends then. They are some of our oldest and dearest friends. We can always pick up life RIGHT where we'd left off. We always have time for a meal together, or a game, or just a long talk. It's always good. 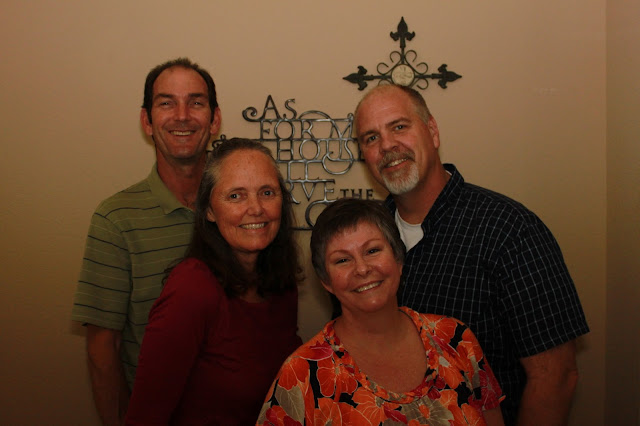 Since we'd just made the decision to shake up our life and expand our church horizons, it got me thinking; what makes for a good friendship relationship, how is it different from meeting a kindred spirit, and where does having fun play into all this?? Was it odd that we could go a year, or 2, or 10 with the vdL's and pick up life right where we left off? It's a delight to have both the wives and husbands get along in this instance...one of the few we've experienced (we left a few behind in KY too), but how do they really come into formation? Is there anything you can do to nurture those friendships? Help them along?

Do people just not get together any more? Do women meet in secret to share coffee, pray for their marriages, each other, and get together for fun and games? Do they just not do it at all?

My parents were not Christians, and they met together with folks that they knew - from work (?) - I honestly don't know where they met these people!! Likely, they were friends of friends, that moved from the "old neighborhood back east", and were given a phone number for someone to know when they moved to Southern CA. I know that there wasn't a blood relation between us...so I think they just got to know each other from a mutual friend. There certainly wasn't any social media to point them to "a friend of a friend" or make it easy to look for friends in common. There wasn't an online chat site available, and they didn't belong to a church; unless they met at one of the few Armenian Church activities that we took my grandma to.

One couple, the B's, had kids older than me, and their youngest was a girl my age. We weren't really alike, but we were all kids, and sworn to the "kids table" for activities while our parents laughed and played Tripoly all night long. They lived in North Hollywood, and always served food from the BEST Italian Deli in the world (I have no idea where it was, what it was called, how they got there).

I think we ALWAYS met at their house...I don't remember them ever coming to our house in North Torrance - and it was an hour away at least. Perhaps my parents loved the deli treats as much as I did and they realized that it was a better deal if they drove us all out to the B's house....and actually, it wasn't a house at all, but if I remember correctly, it was an apartment in a small complex! No pool or amenities for us to borrow while we were there, we were banished to the den to watch tv or play with Barbies. They would stop half-way through the night and break out an assortment of wonderful, tasty deli meats -my favorite pastrami, and basturma - that I didn't care for, but was coveted by those that liked it,  and the most AMAZING Italian pastries. I'm pretty sure that while my parents brought me up on Hostess Twinkies and Ding-Dong's, the B's only ever ate freshly made eclair's and cream puffs, napoleon's that were stacked higher than my hands could handle holding, and baklava that was so sticky - syrupy - clove infused - crispy - deliciousness....oh yum...

They did nothing more than play Tripoly, talk about work, family, friends, and eat (oh, they all smoked too... something that wasn't yet deemed unsafe for our health...and had an occasional mixed drink or beer). Still, I'm pretty sure that there wasn't more than my mom's Armenian heritage and some friend from the East Coast in common. His job - as an artist who did "touch ups" on photographs/film in the movie industry (long before computers!) - was no where close in connections to my dad's job as a Union Representative with the Bakers' Union. We were too far away for the mom's to get together. Although their family played tennis, that wasn't anything our family did, so we didn't have that connection, and the kids ages hop-scotched around - my mom's first 2 girls were older than their 2 oldest kids, who were well older than me...then their one daughter my age, and my little sister. It was just the 3 of us that were close in age, so it wasn't getting us together to let the kids play. They were clearly the one's having fun, just playing games and talking together...building community despite the differences. It was pure, social fun! Does anyone do that any more??

When Mark and I first got married, there were folks that we'd do the same thing with - get together for game night,  everyone bring something to eat or drink, and just have fun together. Maybe watch a movie, or a TV show (I remember getting together with the C's after they were first married, I was still single, and we had a M*A*S*H* party for the last episode!). Just an excuse to get together. Enjoy each other. Have fun. Do life.

Was it a California thing?? I don't think so, as I vaguely remember getting together with friends we had when we lived in GA - but wait - a  lot of them were from CA too! I'm just not sure.... what has changed in society? What have we lost in our culture that keeps these barriers up and puts boundaries between people that might have a deeper sense of community. Are we too competitive? I know that technology has an effect now, but this was something we longed for during our 18 years in the desert too...and something we had found again the almost 3 years we lived in Kentucky. A real sense of community....and fun!!

I'm glad to see that the group we were in back in KY is still meeting, still studying God's word together, still praying for each other. I'm happy to see that they still get together for picnics and game nights, and 5k runs, and sharing meals. What a beautiful thing.

I pray, when the season is right, that we'll gain a group like that here, a mixed bag of people to share burdens and blessings, living life in real time, and loving each other as God's family. Not only meeting on appointed Bible Study nights, but multiple times during the week, for walks, praying, encouraging each other closer to God, and yes, fun and game nights!

Interesting scripture I read today...taking it to heart:

The Message (MSG)
20-33 Who in the world do you think you are to second-guess God? Do you for one moment suppose any of us knows enough to call God into question? Clay doesn’t talk back to the fingers that mold it, saying, “Why did you shape me like this?” Isn’t it obvious that a potter has a perfect right to shape one lump of clay into a vase for holding flowers and another into a pot for cooking beans? If God needs one style of pottery especially designed to show his angry displeasure and another style carefully crafted to show his glorious goodness, isn’t that all right? Either or both happens to Jews, but it also happens to the other people. Hosea put it well:

I’ll call nobodies and make them somebodies;
I’ll call the unloved and make them beloved.
In the place where they yelled out, “You’re nobody!”
they’re calling you “God’s living children.”
Isaiah maintained this same emphasis:
If each grain of sand on the seashore were numbered
and the sum labeled “chosen of God,”
They’d be numbers still, not names;
salvation comes by personal selection.
God doesn’t count us; he calls us by name.
Arithmetic is not his focus.
Isaiah had looked ahead and spoken the truth:
If our powerful God
had not provided us a legacy of living children,
We would have ended up like ghost towns,
like Sodom and Gomorrah.
How can we sum this up? All those people who didn’t seem interested in what God was doing actuallyembraced what God was doing as he straightened out their lives. And Israel, who seemed so interested in reading and talking about what God was doing, missed it. How could they miss it? Because instead of trusting God, they took over. They were absorbed in what they themselves were doing. They were so absorbed in their “God projects” that they didn’t notice God right in front of them, like a huge rock in the middle of the road. And so they stumbled into him and went sprawling. Isaiah (again!) gives us the metaphor for pulling this together:
Careful! I’ve put a huge stone on the road to Mount Zion,
a stone you can’t get around.
But the stone is me! If you’re looking for me,
you’ll find me on the way, not in the way.
at May 27, 2013