The House Hunt begins, and ends!!

Last week was a marathon in taking baby steps towards our move from Kentucky to Arkansas. I was able to fly out to the area, and since Mark was out of town for work, I managed to navigate getting the rental car, my luggage, and contact a friend for dinner (actually, an old school mate of my son's - so a much younger friend!!) and then get to the apartment that Mark's living in while we're apart. I didn't get lost, but had several "deja vu" moments along the way!!

The next day, I had an appt. to meet with the realtor early, to see the homes that Mark and I were wanting to see. It was a hoot! The first home she took me to we felt certain was meant to be ours. One of Mark's qualifiers was a basement - and this listing said "1000 sq ft of unfinished basement space" - so BINGO!! We were expecting to see a 1800 sq ft home with 1000 ft of unfinished basement space, we'd even talked about how much fun it would be to have space to store boxes, have a storm room, and maybe set up a ping pong table!! YES!! THIS would be our new home for certain!!

Well, upon pulling up to the home, it was lovely enough! The house setting had a lot of mature trees in the back yard, and the really hilly back yard wasn't nearly as hilly as we thought; we were pleasantly surprised. But when we walked in the front door - it was NOT home. The living room wasn't large enough to put a full size couch in. There was an eat in kitchen, which isn't a problem at any given time, but we had hoped to have room to invite folks over after church, and International Students over any other time. My heart sunk, but we plugged along. (Mark was actually able to meet us there, and tour this home with us; a nice surprise!)

The realtor led us to the patio off the back of the kitchen, not too small, but it felt odd to be so high up in the air on the back deck. I was curious as to why she'd lead us downstairs to the yard, when I realized that the "basement" was ONLY accessible through an outside entrance. Bummer. Then when she opened the door, I was SHOCKED! It was nothing more than the dirt floor of the crawl space under the house!! Granted, some of it was deep enough to stand up - but it was in NO way an "unfinished basement" - although she said that we were thinking of a "MO unfinished basement and not an Arkansas one"!!

A few homes later, after Mark returned to work, we approached one that was in our targeted price range. She let me know that the tenant would be there to assist us through the home, because she had birds. "OK" I thought. "Hmmm. Why would she need to have us chaperoned because she has a few birds?" I was thinking birds in a cage, when in fact, they had their own bedroom. With a screen door on it. The whole room was to cater to them. Not a cage in sight. She let us know that the birds were in mating season, so they might be aggressive. We were not to disturb them, as they were taking turns building a nest, preparing it. THEN she told us that the birds were both male!! Apparently, even though they would not "mate", they still went through all the stages of preparing for a mate. One that their owners felt they didn't need or deserve, despite the fact that they gave them their own room!!

We laughed a while over that one, and crossed it off the list.

Out of the 6 homes we saw, really only one was a contender - and it was the farthest from church and the University, but in good proximity to Mark's office. At the end of our day he met back up with us and drove out there with us so he could see it too. After we left the realtor, he insisted that we drive the areas of the 10 other homes that I would see on Friday. I spent 12 hours in the car, looking at homes from inside or out. I was exhausted, and could barely keep my focus on what was found at each house. I was very confused.

On Friday, our very kind realtor took me to 10 other homes, in our target price range, and a little above, just to see what was out there and available. I should quantify a few things - our "target price range" was way less than what "the bank" said we are qualified to buy - they don't take into account tithing, or generous giving, or vacations - so we've always tried to live "below our means" in that department. The other blessing is that because interest rates are down so low, even to keep our house payment where it is now, we could get WAY more house than what we have, so our plan to have extra space to have people over to feed them (Marina's Kitchen Table in real life, not online!) was a reality. God's so good!!

Well, I was so determined to stay below our target range, I kept leaning back into the house on the other side of town, away from church. She breezed me through the 2 houses that were above our "target" (but within our means) - I didn't even really pay attention to them - then Mark showed up - and HE went crazy for the one he got to see. Grrr.

I didn't care for the style - European Traditional - where I'm more country or contemporary, although the floor plan WAS a split - with the master bedroom on one side and the guest rooms on the other side. Mark loved everything about it. EVERYTHING. I was still thinking of the other house, a little less .... stuffy?...but still VERY nice  - and technically larger square footage...and another FULL bathroom...but every time I thought of that house, being farther from church and the college campus, I KNEW that we wouldn't be making an offer on it. It was tempting, but it wouldn't happen.

We ended the day with 3 houses to see on Saturday morning, with the plan of making an offer on one of them. I knew which one it would be, but through the evening we discussed looking at a few other homes in "that" price range to see what else was available. Our realtor was a good sport to take us through the 3 homes, and then through 3 more to compare. Even I didn't like the other 3. Ugh. I knew which house was left on the list. And I didn't like it because it was TOO nice!! LOL

So, we got the house that Mark wanted from the start. And we went back and forth a little on price and conditions, but landed in a blessed spot. And have a house in the process of being purchased.

Many of you know that I've been counting 1000 Gifts from God over the past several years, and this year I've been doing it more publ... 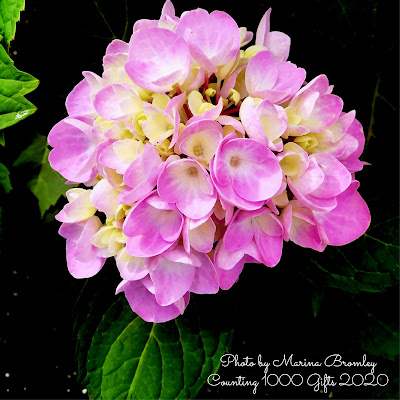