On making a house a HOME... 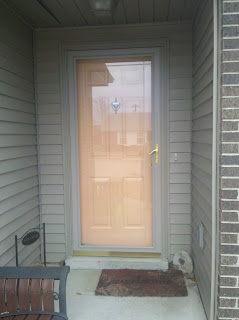 There's something sacred when you move into a new house - ok, not a brand new, builder's grade, pick out the carpeting colors house - but one that's new to you. One that bears the scars of misuse by years of other residents, one that has been abused - but has good bones.

I'm the painter in the family. I LOVE to paint! More than choosing colors and imagining what potential a room will hold, I love the immediacy of the change - instant gratification. I love seeing a new hue appearing on a wall, how it changes with the afternoon light, how it looks with things hung on the walls, furniture in place. I love the change.

About a year ago we were hunting for houses, making a move from Cassville, MO to Henderson, KY. We had lived in Cassville for 19 years...our kids were mostly raised there (minus a few years in GA and a partial year in AR). For better or worse, we lived in a grand total of SEVEN houses there... and a grand amount of cleaning up after people and covering a multitude of walls took place over all that time.

I'm not sure if it's because we moved so much, or because I was never really happy there, that it never felt like home. I always said it was my "40 years in the wilderness," those 19 years in SW MO. It was a season of growing closer to Mark, growing closer to God, and learning more about myself. I felt that once I (or someone near to me - I have no idea who) learned what it was that I/they were supposed to, I would be released from that area and in to the promised land....or at least to another area of the world to wander - until I learned my lessons there...here...

So, after a few months in an apartment (now THAT'S another blog spot all together) we moved into our small home. We opted to be content with small for a number of reasons, mostly being that we didn't want to be "house poor," and we had learned in the apartment that we (being Mark and I and Abbey the Wonderdog) didn't need a lot of space. A little house in a subdivision, enough yard to put a barrier around us and grow a little privacy, and a quaint neighborhood to grow in. We love where we live...although sometimes I long for a larger kitchen....just large enough to bring the rest of the stuff in from out in the garage... seat a group around the table without having to squeeze against the wall....but those times happen so few that it's really ok here. Really.

If you've ever bought a "used" house you know the fantasy....all the things that you want to do "soon" (but realistically don't get done until just before you put the house on the market to sell). My list included a lot of painting (of course), new flooring (mostly done), and a complete landscaping overhaul to make the  house look more like a French garden than a tract home...needless to say, I've placed my order with Burpee Seed to see what I can cultivate here.

A can of paint can do so much good. Recently I knocked off one of my goals and got rid of the hideous front door color - which was as close as I can describe as dried blood. Usually, in every other house I've resided in the past 15 years, I've opted for a berry red color - bright (but not too bright), warm (but not too orange) and inviting. This house, with brownish brick and tan siding, looking like every other house on the block, needed something different. Something to make it stand out. The fact that it sat back in an alcove (which is great to keep you dry while you're coming in the house) made it yell "bright" a bit more. I had chosen a very mellow barely apricot color, but Mark said it was too white. The second coat is definitely apricot. I hope it YELLS "WELCOME!! COME ON IN!!"  : )

The shutters are down from the brickwork and awaiting their turn to be changed from that dried blood red color to a welcoming almost teal...trendy, sure...but also welcoming and bright. The garage door will be soon to follow.

I have flower seeds ordered that will also highlight these colors, bringing the total look together. I'm not a fan of shrubbery, but recognize the need to have some mainstays in a garden. I'm hoping that in time we can pull things out (including a tree in the front yard - a nice tree - but not the RIGHT tree!) and replace them with hydrangeas and Eastern Redbud's, perennials to take root and a bevy of annuals that will reseed themselves and surprise me with their seasonal blooms.

So, small kitchen and all...this is home.

I'm blessed with a group of friends here that have all moved from someplace else.  Some of them still call the last place they lived "home." They'll say, "I'm going back home for the weekend" or "I want to go home."

One of them asked me the other night, where I hoped to "end up."  My first response was heaven (no duh), and then I said "wherever He leads me"...the truth. See, many people still call where they came from "home", but I know that for whatever season, no matter how long it lasts, home is where I am. I can change the color of the walls, rearrange furniture, plant a garden...and it's home. It's where I go to every night, and wake up at every morning. It's where I long to be in a rainstorm, and where I want to make memories with my grandkids (who all live someplace else).