When our kids were younger, there was always a retreat on the horizon - whether for our kids to attend, or for us to sponsor, we were always going on a get away.

Now days, Mark may have a trip he needs to take occasionally, and I've had a few missions things to get to go to, but it's not with the same mindset of being restored and renewed in our spiritual walk.

Sometimes I would like to be a kid, and catch that same wave of enthusiasm that kids come back with from summer camp! Of course, maturing in Christ also means learning to reside in that spot on the mountain top, in and out of season...so daily my walk is closer to that spot - but I still long for the outpouring of love that you feel in that spot.

Mark and I had decided a few months ago that we would take an "us vacation" this year. Our whole married life (all 27 years of them) there have only been a few times that we did something away for "us". One time Mark had to work in Puerto Rico and his mom came to stay with the kids so I could join him for a few days (out of the month or so he was there). Since he got up and worked every day, while I lay on the beaches, dodging showers and soaking sunshine, I guess that one didn't really count...   Oh, but a few years later, I think it was the first year that we moved to MO, we took all his frequent flier miles, and all his hotel rewards, and flew to the Bahamas for a weekend. We were broke and couldn't afford anything more than a few days of the "all inclusive" trip....but we got away!

Since then, we have had some great times together, but they have been kid driven (all those sports activity trips, and even our BIG trip to Asia!!), or grand-kid driven (gotta see those kids every now and again!!), or work driven...which is always a blessing when they pick up the tab! For whatever reason, we just haven't put much time into taking "us" on the road, just to spend time together.
But we did this time.

So Mark put this week on the calendar at work, set aside this time for us to get away. We didn't know where...he thought of doing a cruise, then he thought of going to Myrtle Beach, but we couldn't settle on any destination. The requirements were this: warm weather (well, warmer than it's been at home), a large body of water (waves preferred), and no family or friends allowed. This time, it was going to be about us....just the 2 of us!

We literally didn't know where we'd end up till we were driving in our car and coming to a point of having to choose the fork in the road: go east to the coast, or south to the gulf. We decided to go south, only because the weather would be a little warmer.

We didn't have a hotel, and after making a few phone calls and using our smart phone to surf for deals, we decided to wait till we got there...got here. I feebly stated my wish-list-prayer to God as we gave up on the phone calling..."hotel on the beach, beach front room, king size bed, non-smoking, breakfast included for under $$$."

We arrived in Pensacola Beach by a series of deductions (instead of the Orange Beach, AL area), and started driving the strand...we went west first, past a few huge hotels, one with no balconies and one with "Margaritaville" in the name...(pass on that), and then turned around and headed in the other direction. LOTS of high rise, big name hotels. For whatever reason, Mark chose the Marriott, and went in to see what the rates were...if there were any deals to be had.

Of course, he came out with exactly what we needed...all our needs met - and because of the special "buy 2 nights get 1 free" deal, we got it for the price we'd hoped for overall. God's so good!!
We've enjoyed the lazy days of beach front living. We've reminisced about our own young married life living near the Pacific Ocean, talked about the storms at sea, and the ones we've weathered in marriage, and we've been able to re-connect with each other in life, and in marriage. I highly recommend getting away every now and again - just the two of you - to remind each of you why it was that you fell in love with each other in the first place... 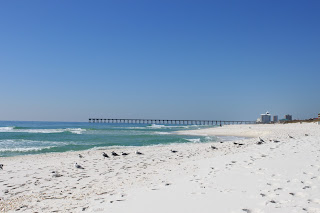 The sunny skies of yesterday have given way to the rainy ones today, and yet the turquoise waters of the gulf are as beautiful as ever. Winds are whipping the white caps, pushing them with a frenzy on the shore...the sun is slowly trying to push out from the clouds...we may have a lovely afternoon...but for now it's cool and windy...

Oh, and for the record...you don't have to spend every waking moment together doing a list of things prepared for you to do...even now, while I'm blogging, Mark is out beach-combing...looking for a whole sand dollar as big as the broken pieces we saw on the beach all day yesterday. Now, I'm going to lay down and hunker under the covers and take a little nap...until he comes back with all his treasures...
at February 07, 2011