On being still, and knowing He is God...

Sunday we had an amazing time of worship, done in a way that is not often seen in churches around the world. Through power point and recorded songs, voices reading and photo slides, we were led through a journey of silence in worship. The topic was focused on being still and knowing HE is God, something we know, but don't practice enough.

True to form, today I am back to being busy! I've had an ongoing project of going through ALL of our stuff in storage; things moved from house to house over the past 20 years. I'm not just moving piles, but going through folders, papers, photos, and dividing things into smaller stacks, boxes and throwing out a LOT. Just now I ran across this:

"Be Still and Know That I am God

I have been struggling so much with this scripture. Oh, I can be LAZY, especially when I'm sick, and I've been sick for a month now. But every day - healthy or not - I have not been able to "be still".
A few years ago I was working at a summer camp as a cook. Although God blessed me with a great crew, there would be times that a job would arise that we could not physically do. In times like these, I would seek out some big guy to help - someone who was usually just hanging out in the air conditioning and would enjoy an excuse to be there a while longer.

As I looked around the building that particular time, there was a sponson just sitting there - well, he was reading, but that didn't seem nearly as important as getting the beef out of the freezer that was stuck together in 5 lb logs. I asked, "Hey, are you doing anything, could you lend me a hand?" and he replied that the last time he checked, "reading" qualified as doing something and therefor he was busy!

Well, I was offended that he wouldn't help, but even madder when he had time to give me a mini sermon on resting in God, and how he found that to be an important time to spend with Him. That I might even benefit from NOT doing something all the time!

I mumbled something about how it didn't get the campers fed for me to do "nothing" and sought out a willing helper for my task.

But his talk never left me.

Lately I've been focusing on God's will for my life. Along with about being still, has been Hebrews 7:15, "Then Abraham waited patiently and he received what God had promised."

Being still, and waiting patiently, are two different actions, but are still similar. The action taken is resting, peaceful, maybe even restorative in nature. I used to think that being still was doing nothing - like the counselor who was too busy reading to help. But lately I'm learning that it takes great effort to "be still" just as it takes effort to "do nothing".

Even in my illness I still have to "do things" - I take medications, prepare and eat meals, bathe and dress and yes, even read and write! Unless I make a point to set aside a time to "rest" I will keep myself doing things and not "being still".

I am reminded of my youthful days spent in the waters off of Southern California. Surfing, body surfing, boogie boarding were all the "reading" of the day, and any swell out of the ocean's deep green was a reason to be out there.

Many of us would paddle, furiously at times, to position our bodies in just the right place on the swell to be carried away by the wave. More often than not, we could miss the swell altogether, or be slammed into the shore.

But sometimes, without any effort on my part at all, the water's swell would encompass me, push me along, force me to stretch out and ride it along. Farther and farther I would go, until it would gently release me to quiet waters.

I did not make the wave, or have any say so in how it was created. It was not my doing to propell myself across the surface of this swell. It was in the waiting, in my stillness, that the power of God's ocean was released and allowed to work. Gracefully it worked with me, for my benefit and blessing.

I'm hoping to remember that more now. Wait. Not to remember, but to DO. To BE STILL and WAIT PATIENTLY, so that I may see the great ways He will work around me, in me and through me. Then I might receive all He has promised to me.   3/14/2003"

Well, that's been several years ago now, but I'm still learning the same lessons I hadn't learned well enough back then! New ways to learn, the same scriptures, the same God. Somehow it's all going to make sense some morning - I expect to wake up and just *POOF* get it! I expect to know how to do it, how to put it all into practice, how to make it all work together for His good.

And if not, if I haven't learned that lesson (or any of the others that He's good at reteaching me), I'll keep following Him, reading His word, allowing Him to send others into my life to show me new ways to learn....and learn I will!
at February 10, 2010

Email ThisBlogThis!Share to TwitterShare to FacebookShare to Pinterest
Labels: be still and know, camp, devotion, learning, waiting on Him

Life has been a bit crazy and unpredictable lately...hasn't it? Because God is our constant when life is crazy, I've arranged thro... 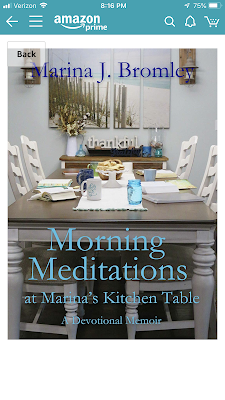